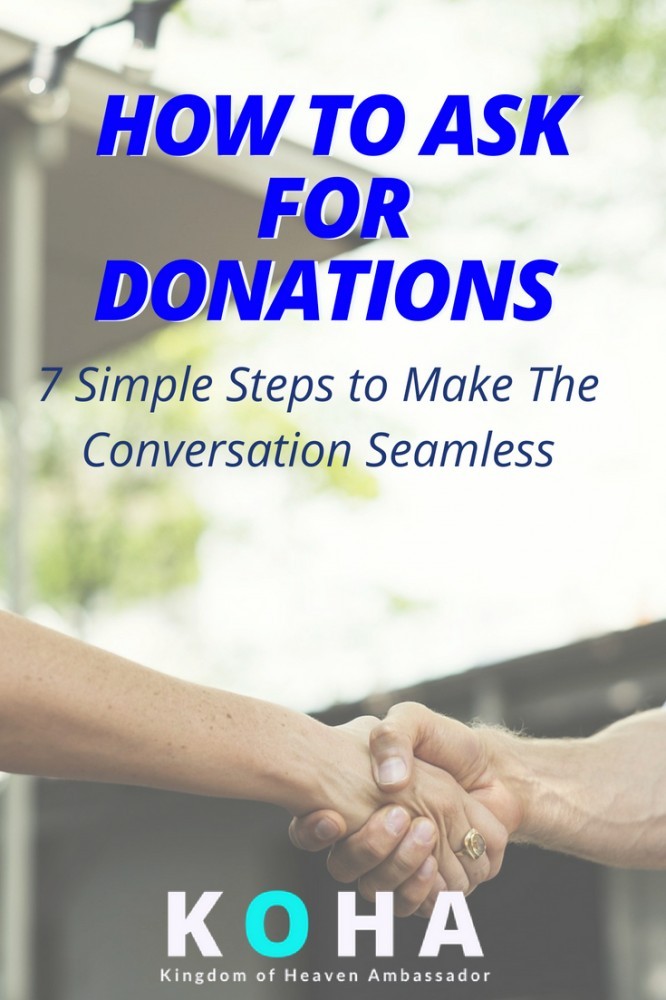 Whether you’re starting a for profit or a nonprofit business, there’s a chance that some time you’ll need to ask for money.  Asking for money is not naturally comfortable for anyone I know (even if you’re asking for money in exchange for a product or service).

It’s something that has to be practiced over and over, and with time, you get better, however, you want to practice asking for donations with some basic principles in mind. Let’s discuss a few…

The Ethical and the Nonethical Way to Ask For Donations

Since discussing how to ask for donations is rare, sometimes, people use unethical methods unintentionally.  They may use religion, invoke emotion, make people feel guilty or misuse power in some other way to persuade donating. I talk more about Manipulation vs. Persuasion in my article HERE.  Check it out!

It’s never good to use unethical methods of persuasion.  Instead, you want to attract people who genuinely want to see the cause thrive, and request their donations.  In his book Influence: The 6 Principles of Persuasion, Robert Cialdini mentions 6 principles you should know and apply when you can.  They are: 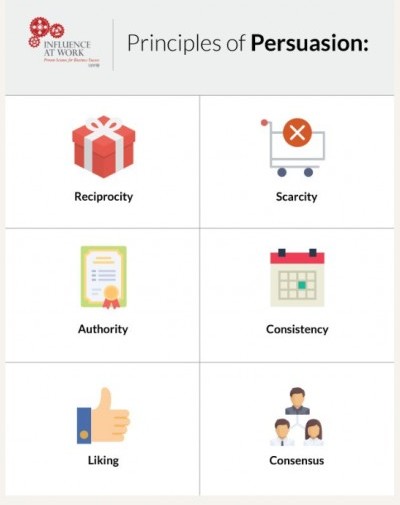 The “What’s in it for me?” Principle

Second, I want to discuss the “What’s in it for me?” (WIIFM) Principle.  I made up the name, so don’t go searching for it online or in libraries.  You’ll understand what it means as I explain though…

Some examples of ways a donation can benefit a donor would be:

With WIIFM in mind, now it’s important to think about some general steps that make the process of asking for donations more comfortable… 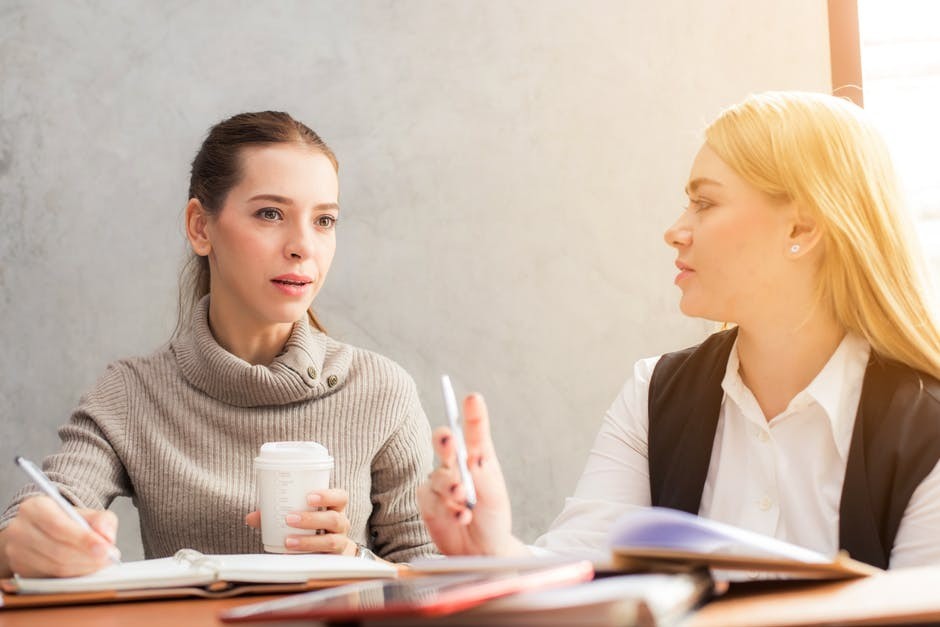 Getting to Know Potential Donors

You can’t really know “buying motives” or what makes a donor want to give unless you’ve built relationships.  When you get to know people, you can begin to understand passion points, and their “why” for giving.

Some people will have tragic stories where a charity connects to a severe pain point, so they’re loyal or giving back givers.  Others will have values or beliefs that connect with the organization and what they’re doing.

At Wabash College, they did a fundraiser that far exceeded their expectations.  They usually raise $8 million annually, but one day in 2014, they managed to raise $500,000! 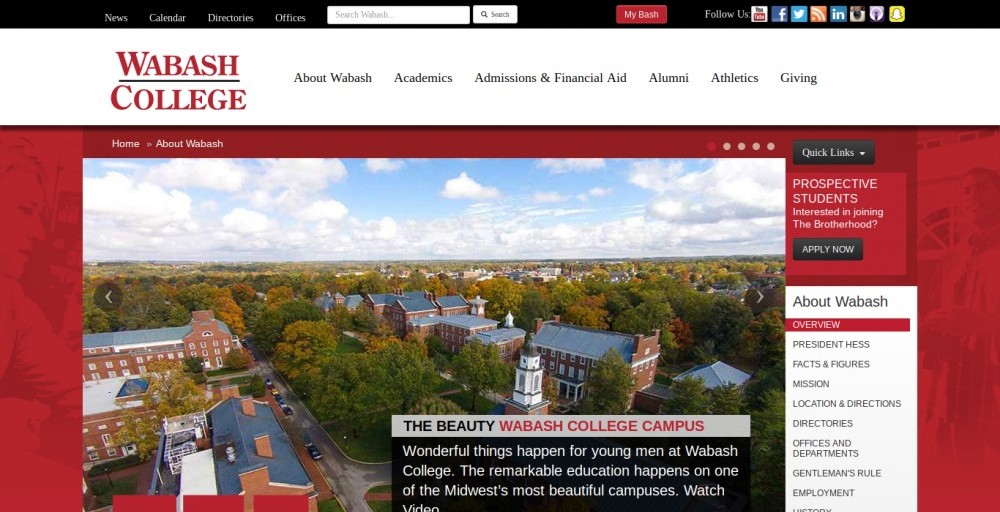 Their actual goal was to raise $43,000 from a group of 430 alumni, however, the fundraiser managed to 10x their goal.  They used the WIIFM principle, studied their target audience, and created a fundraising campaign that worked.

This type of fundraising worked well for Wabash as an established college with a longstanding record of alumni.  They were able to get more than 10 donors from majority of their graduating classes dating from 1961 until 2017!

While your organization may be much newer with a little more fragile standing, there’s still some basic things you can put in place that can enable you to ask for donations successfully.  Here’s a few steps…

The 7 Steps for How To Ask For Donations

Without a plan, you won’t have clarity and neither would anyone else.  People can listen to grand ideas all day, but unless you’ve clearly outlined the idea, the outcome, and what’s needed to bring it into fruition, it’s difficult for others to grasp.

In your plan, you want to identify your target audience by demographics and psychographics.  You want to know what challenges they may have and how your organization can help solve them.

For example, if you know your target audience lives in a snowy climate and you’re asking for a donation in the midst of severe weather, you may want to coordinate an alternative option for giving.

Similar to running a race, no one wants to pursue something without an apparent end.  When you’re running a marathon and the end seems so far away, it can be very discouraging and makes you think about giving up.

With an organization requiring donations, you don’t want your donors to be burned out because it seems like the asks are ongoing.  When you identify a clear goal, it can help the morale because it makes a clear end. 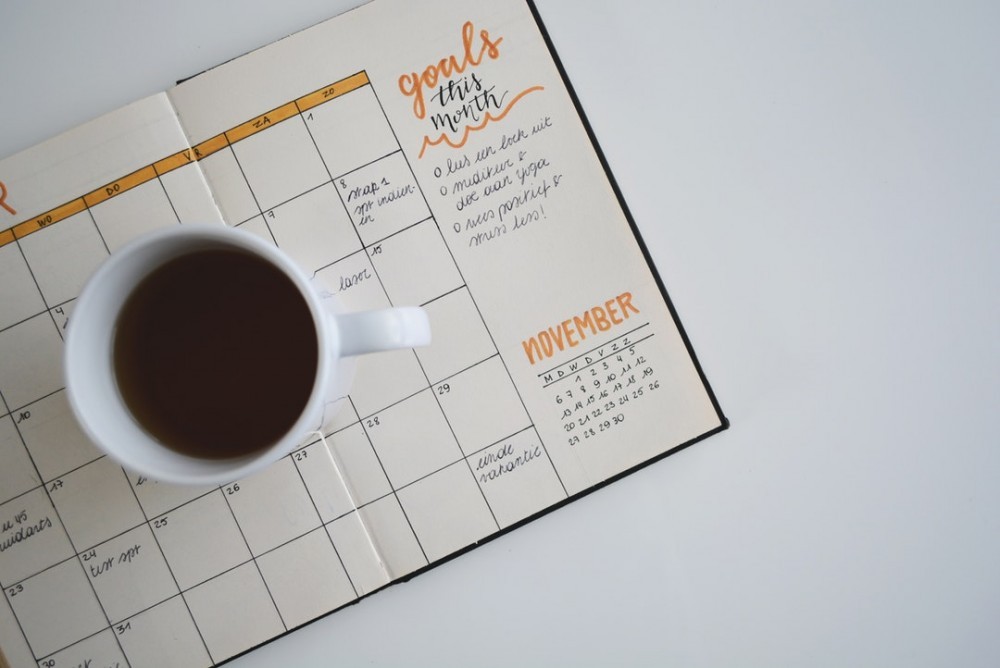 Even with the best selling devices on Earth, there’s always someone who will say “no”.  Don’t take the rejection personal and expect that it will come at some point.  Alternatively, if you find yourself getting many “no’s”, know that you’ll also get “yes’s” if you continue to ask.

Reiterate Your Mission, Vision, and Purpose Statements and How People Can Make a Difference

You can establish a bad reputation by being the person that’s known for “always asking for something”.  In his book, Jab, Jab, Jab, Right Hook, Gary Vaynerchuk talks about balancing out asking with giving.  Similarly, the Bible says “Give and you shall receive”, therefore, it’s a principle that should permeate the donating culture.  You don’t have to give something that would financially cripple the organization, instead, you can give:

People want to know they’re not being “used”.  Give them something that adds value, so they can see the relationship is a mutual benefit. 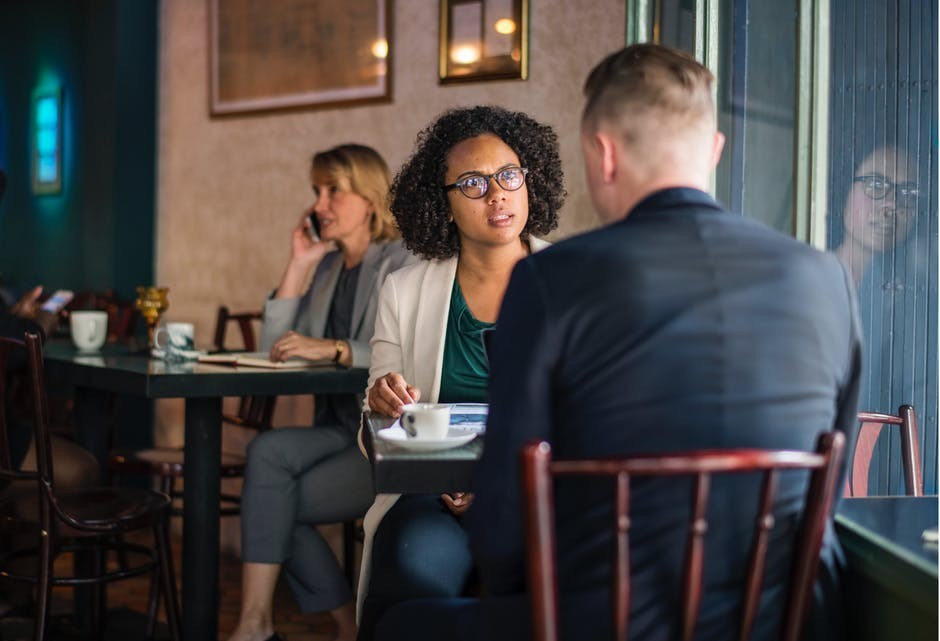 Whether you’re asking for the donation as a part of a fundraising event or in a one-on-one conversation, you want to make clear transitions.  A clear transition could be, “Look, Jeff, the point in my call is…”, “Now that we’ve enjoyed the festivities, I want to discuss with you all…”, or another transition statement that makes it clear one portion of activity is over and serious dialogue must ensue.

Without a transition, people may think it was awkward how you were talking about one thing then you ran into another.  They may also be uncomfortable with the environment, but if you inform them that you need to discuss something serious, then they can suggest an alternative location.

Adding the transitions are a show of respect and boundaries in the conversation.

In this portion of the conversation, you want to identify to them the benefits for them.  You could say something like, “I know it’s important to you that the gospel is spread all around the world”, “I know you’re looking to have more visibility for your business”, or “I know you want to end child trafficking because of the incident that happened in your family”.

Whatever you say at this point, is the connecting agent between the donor and your cause, so you want to be sure the benefits equal or surpass the value of the money you’ll be asking for. 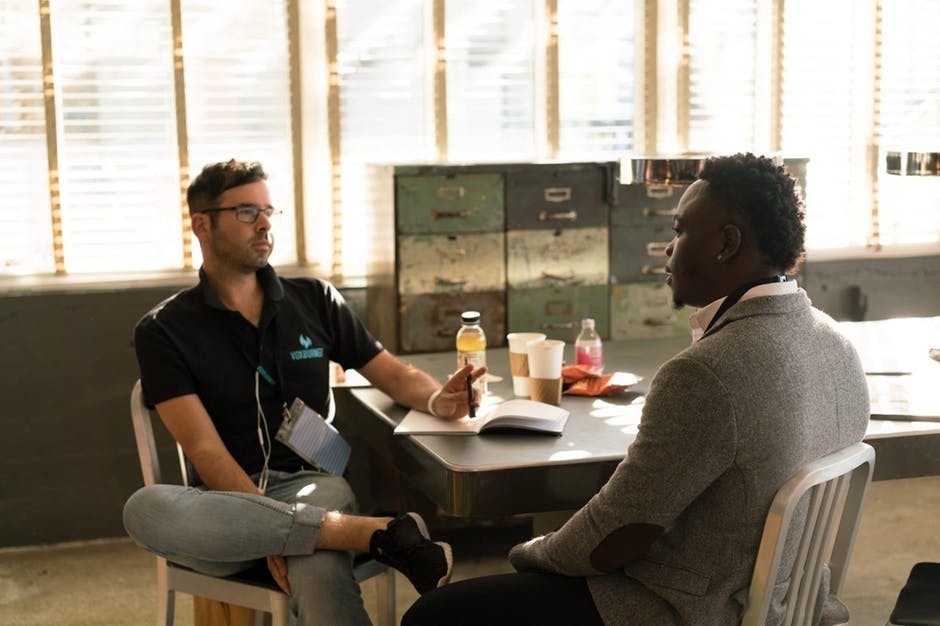 Your organization is in place to solve a problem and each fundraising campaign you do should solve a problem also.  After identifying the benefits for the donor, you want to illustrate the problem.  Some examples would be:

6. Tell How Their Donation Will Help Solve the Problem

Often times, the problems can seem enormous in comparison to the donation one person can give.  You want to tell how the donation can be helpful as specifically as you can.

Take a look at the Food For The Poor website… 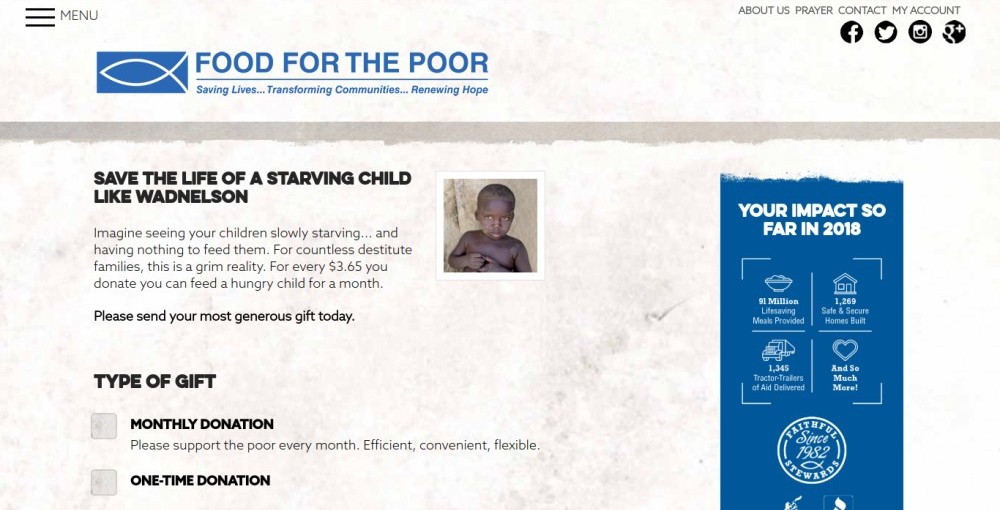 It says “For every $3.65 you donate, you can feed a hungry child for a month”.  As a donor, you can easily calculate the impact.  If I give $3.65, I can impact one child for one month, but if I give double or 10 times $3.65, I can impact more.  As an organization, you want to provide clear information like Food for the Poor has because it makes it easy for donors to understand the impact of their giving.

Ask for the the donation.

When you put the entire plan together, it should go something like this…

On one particular phone call, you go thru steps 2-7 like this…

How are you?  How’s your family?  We haven’t talked since last Sunday. How did everything go this week? (regularly engaging)

I remember you said, you were really passionate about local missions (WIIFM)

If we had just ten people who could give $100 or more, we’d be able to send out local missionaries this year (Donation impact)

Do you think you would be able to donate $100 or more so we can send out local missionaries this year?  Do you know anyone else who would be interested in donating? (the ask)

Final Words on How To Ask For Donations

The goal of this article was to show you how to ask for donations.  Asking for money may be uncomfortable starting out, but with time, it gets more and more comfortable.

If you have questions or concerns about this, don’t hesistate to leave them in the comments section.  I’d love to help you out!

Have you asked for donations before?  If so, what was your process?  What would you recommend to others?

2 thoughts on “How to Ask for Donations: 7 Simple Steps to Make The Conversation Seamless”